On October 12, 2009, Taser® International issued a training bulletini dealing with the potential impact of Taser® on events ending in cardiac arrest.  Although the bulletin details the unlikely prospect of a Taser® deployment leading to cardiac arrest, it does raise the possibility that such an outcome could occur.

“Should Sudden Cardiac Arrest occur in a scenario involving a TASER® discharge to the chest area – it would place the law enforcement agency, the officer, and TASER® International in the difficult situation of trying to ascertain what role, if any, the TASER® ECD could have played in a unique situation that cannot be replicated in human clinical safety evaluations. In order to reduce the risk of such an event, and in light of the fact that frontal applications of TASER® ECD’s have been found to be more effective when the probes are targeted at the lower torso (engaging the balancing muscles of the pelvic triangle) we have lowered the recommended point of aim from the center of mass to the lower center of mass for frontal discharges. We believe this recommendation will improve the effective use of TASER® ECDs while also further increasing safety margins and enhancing the ability to defend such cases in post event legal proceedings” (emphasis added).

Media and legal commentators see this position taken by Taser® International to be a new acknowledgement that Taser® may lead to cardiac events.   In a follow up release to customers, Taser® International clarified that it is trying to minimize the risk of defending death cases involving the device where the probes are in close proximity to the heart.

One thing is clear, such a warning to the users of this device, reduces Taser® International’s exposure to a lawsuit in cases involving deployments to the chest which are followed by a cardiac event.  In addition, users are now on notice that it may be argued that a deployment to the chest was an improper use of the device.  While it is unlikely, based on the research that the deployment of an electronic control device can cause a cardiac event, law enforcement must heed this warning and make changes to policy and training.  The failure to do so may leave the law enforcement community standing alone in the lawsuit, since the company producing the device has issued a warning that avoiding the chest is the best practice. 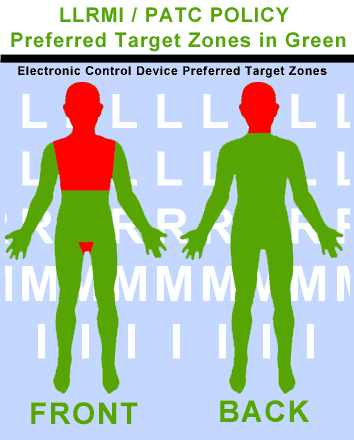 Taser® International has recommended that the frontal targeting area be lowered so that the chest is avoided.   Taser®, in its training bulletin asserts:

“We have issued a new TASER® Targeting Guide that will apply for the new XREP impact munition as well as ECDs such as the X26, M26 and X3.
Note, we have lowered the recommended point of aim from center of mass to lower-center of mass for front shots. The blue highlighted area in the adjacent target man represents the preferred target area. There are three reasons:

A. Simplify targeting for all TASER® systems to one easy to remember map, avoiding chest shots when possible and the risk of a head/eye shot in a dynamic situation, as is standard for impact munitions.

B. When possible, avoiding chest shots with ECDs avoids the controversy about whether ECDs do or do not affect the human heart.

C. Close-spread ECD discharges to the front of the body are more effective when at least one probe is in the major muscles of the pelvic triangle or thigh region.

Back shots remain the preferred area when practical”

One of the difficulties that law enforcement will face is that aiming to the “pelvic triangle” enhances the probability that the genitals may be hit during deployment particularly in dynamic and fluid situations.  Law enforcement has always been warned against a deployment aimed toward the genitals.  Thus, policy and training should reflect a warning against chest deployments as well as warnings related to deployments aimed at the genitals.  This is going to make frontal targeting even more difficult in dynamic and fluid situations.

All officers and agencies are encouraged to review the attached policy (referenced above) which is provided as a free service of PATC/LLRMI.  We at PATC/LLRMI remain strong proponents of electronic control devices generally and Taser® specifically, however, a provision limiting chest shots to deadly force situations is clearly the best risk management advice in light of this new warning from Taser® International.

About the Author: Jack Ryan, Attorney